The U.S. Air Force Academy actively manages the forests within the

Academy boundary for health and resilience to natural disturbances including wildfire and insects. Forests that have low densities and fewer understory trees are are more characteristic of the open woodlands historically present in Colorado's Front Range. These stands are more vigorously growing, tend to create reduced fire behavior, and are better able to repel various insects that feed on them. Regionally, the Academy partners with other land management agencies and organizations to achieve these same objectives on the greater Rampart Range/Monument Creek landscape.

The Academy achieves the lower densities and fewer understory trees through a combination of mechanical and hand thinning, mastication, and prescribed fire. Byproducts of the thinning program and other tree removal projects on the Academy are sold as firewood through the Academy Natural Resources office. Information on the Academy's firewood program as well as more information on our forest and fire management program is found below.

The Natural Resources woodlot is open 24/7 and operating on the honor system.  Firewood cutters must measure their load and leave a check made out to the US Treasury in the brown mailbox at the office door. A price sheet and measuring tape is inside the mailbox.  Most firewood is Ponderosa pine, but some Douglas-fir, white fir, spruce, oak, and ornamental hardwoods may occasionally be available.  Firewood is sold for $40/cord in 1/8th cord increments.  Firewood cutters must provide their own chainsaw and safety equipment.

Click here for more information on the USAFA woodlot.

A cord is defined as a stack of wood 4" x 4" x 8" or 128 cubic feet.  We measure the load of firewood you purchase in cubic feet and charge you the nearest 1/8th cord increment.

Forests are habitat for many naturally occurring insects and diseases. While often called "pests" these insects and diseases often persist at endemic levels without causing widespread mortality. Weakened or stressed trees and the alignment of ideal climatic variables can cause insect and disease populations to reach epidemic levels where widespread mortality can degrade the visual environment and cause a cascade of impacts to water and nutrient cycling, wildlife habitat suitability and wildfire threat.

The last decade has brought periods of drought to the Front Range of Colorado, 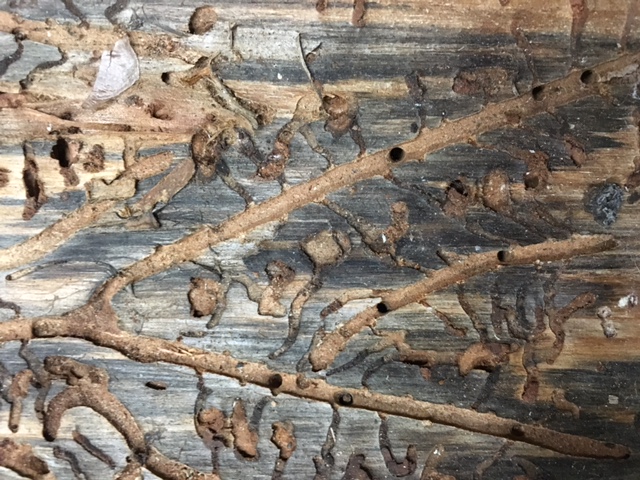 and this has resulted in an increase in Ips engraver beetle activity. Ips beetles are in a family of insects called "bark beetles". Adult bark beetles lay their eggs beneath the bark of trees, and the young beetles, called larvae, create a network of galleries in a thin layer of tissue that transports nutrients in the tree. The collective damage from the galleries can kill the tree if enough beetle larvae are present. Multiple generations of Ips beetles can hatch within one summer, resulting in rapid increases in populations if suitable conditions exist.

Various species of Ips beetles live in small diameter conifers or the canopies of larger diameter conifers and kill or wound the Academy's ponderosa pine, spruce, Douglas-fir and white fir. Over the past few years, the Academy has actively removed thousands of infected trees as soon as they are located in order to prevent the build-up in populations. While the majority of impacted stands were thinned to densities that will make them more resilient to Ips beetles, the increases of vigor to the stand may take years to realize. The Academy continues to monitor Ips populations and remove infected trees, as well as spray a small number of high value trees with a common tree-specific pesticide to prevent damage or death. The Academy's Natural Resources office is partnering with Air Force Academy Cadets to improve the monitoring of Ips populations.

Defoliating moths have recently begun to impact the forests 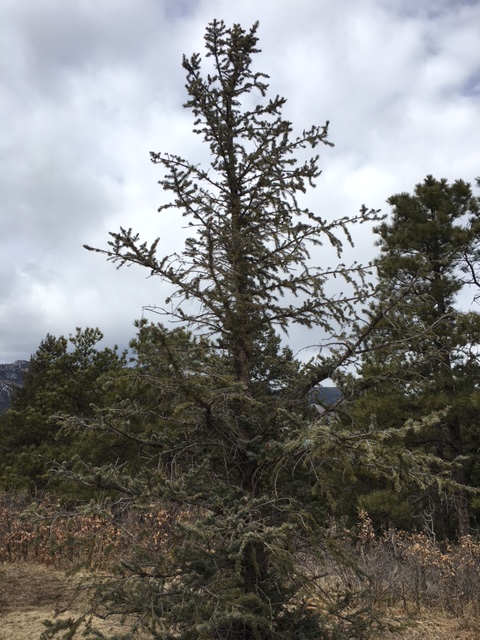 of the of greater Rampart Range/Monument Creek landscape. One of these moth species is present on the Academy and Farish, and is currently causing defoliation of spruce, fir, and Douglas-fir. Western Spruce Budworm larvae emerge in the spring and consume the last year or more's new growth. Like the Ips beetle, multiple generations can occur within a year. When populations increase and defoliations continue for multiple years, mortality can occur.

The forests of the Front Range of Colorado were historically 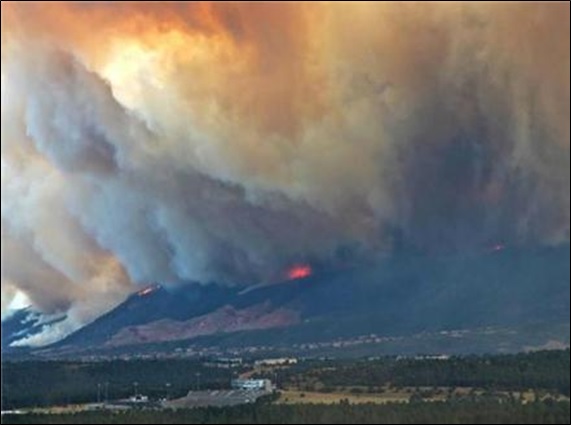 shaped by frequent, low intensity fire. This resulted in open stand conditions and favored fire-resistant species such as ponderosa pine and Douglas-fir that have thick cork-like bark. On some slopes and certain elevations, less frequent, high intensity fire favored fire-resilient species that rapidly resprout following a fire such as quaking aspen and gambel oak. Fire suppression over the past century has been fairly successful at keeping fires small. This resulted in widespread increases in surface fuel and ladder fuel loading in lower elevation forests, which would have otherwise been consumed by the frequent low intensity fire. These altered stands are now at much greater risk to burning at a high intensity, which would have many undesirable effects to communities, the visual landscape, watersheds, and certain wildlife species. Past wildfires on and near the Academy have disrupted training exercises and resulted in the closure and evacuation of residents and employees. Each year many small fires occur from lightning strikes, training exercises, or arson, but these fires are quickly suppressed.

The Natural Resources offices and Fire and Emergency Services have been working together to reduce the threat of fire to the Academy. Each year, hundreds of acres of the Academy receive some sort of fuels reduction treatment, through mechanical or hand treatments and in some cases using prescribed fire. Fire and Emergency Services and the Natural Resources have been working with Academy residents to reduce fuels next to homes and structures, and provide education to residents about fire safety and preparation. Recently, the Academy was recognized for our efforts by the National Fire Protection Association as a Firewise Community®.

To recover burned areas and maintain a diversity of age classes, the 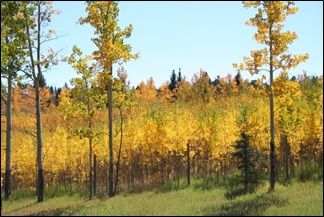 Academy manages a seed collection and aspen regeneration program. The Academy Natural Resources office collects cones from high quality trees during bumper crop years and stores the seeds at the U.S. Forest Service Bessey Nursery in Nebraska. Approximately 1,000 seedlings are grown and planted each year from this seed bank.

At Farish, stands of quaking aspen are reaching maturity and beginning to senesce and die. To maintain and enhance these stands, the Academy has established several small regeneration units where the disturbance of cutting has encouraged aspen sprouting. Today, these regeneration stands are fenced to protect them from elk damage. When the regeneration stands reach suitable diameter and height, the fencing will be removed. Additional harvest units will be added in the future to maintain a diversity of age classes.

The Academy is home to thousands of urban trees of various species. An urban tree is different from our native forests in that they serve a largely decorative purpose and provide shade and character near the Academy's buildings and roads. Many of these species are considered ornamental varieties of trees native to areas outside of the Academy. Each year, the Academy through both the Grounds Maintenance and the Natural Resources monitors and maintains these trees in a healthy condition.

The health of this urban forest is dependent upon receiving adequate water through irrigation, pruning trees to maintain healthy form, providing mulch to protect roots and prevent mower damage, and maintaining vigilance for biotic threats that could damage the trees. The Academy is recognized as a Tree City USA® by the Arbor Day Foundation® for its efforts to maintain the Academy's urban forest.