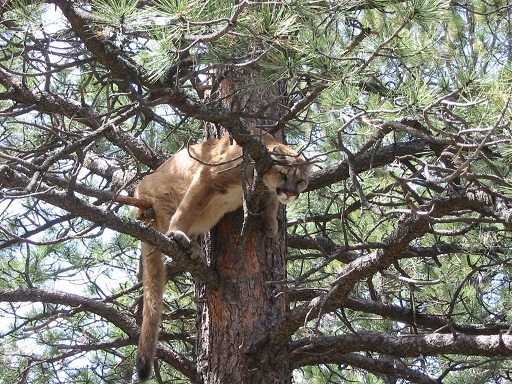 to view an abundance and diversity of wildlife in their natural habitat is an important part of what makes the Air Force Academy a unique military base and educational institution.  Numerous mammals, reptiles, amphibians, fish, and birds make their home in the installation's open space and natural areas.  Mule and white-tailed deer, American elk, Merriam’s turkey, black bear, coyote, mountain lion, beaver, and a wide-variety of migratory birds are commonly observed in the grassland, riparian, and forested habitats.  Native small stream fish, including creek chub, white sucker, longnose dace, stickleback, and fathead minnow are abundant in Monument Creek and some of the  tributaries.  The Academy works closely with US Fish and Wildlife Service and Colorado Parks and Wildlife biologists to protect and manage the habitat and wildlife, which is vulnerable to human activity and development.

Whether hiking with binoculars and a guidebook, driving, or cycling the roads and trails, you can enjoy all sorts of wildlife viewing opportunities, especially if your timing is right.  Early morning and evenings often offer the best viewing opportunities when wildlife are usually most active.  To protect yourself and the wild animals, follow these simple viewing rules: 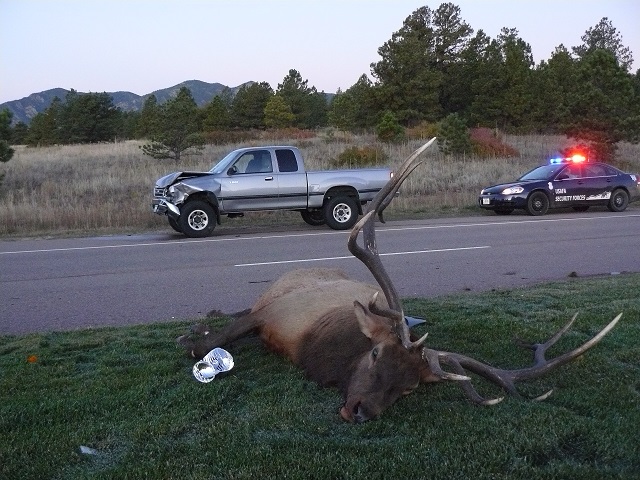 To reduce this road hazard, there are several effective driving practices to follow:

For information on salvaging roadkill deer and elk, see the Hunting page.  The graph below illustrates how important the Academy's hunting program, reinstated in 1988, is for controlling the deer and elk population, thereby reducing the incidence of wildlife-vehicle accidents. 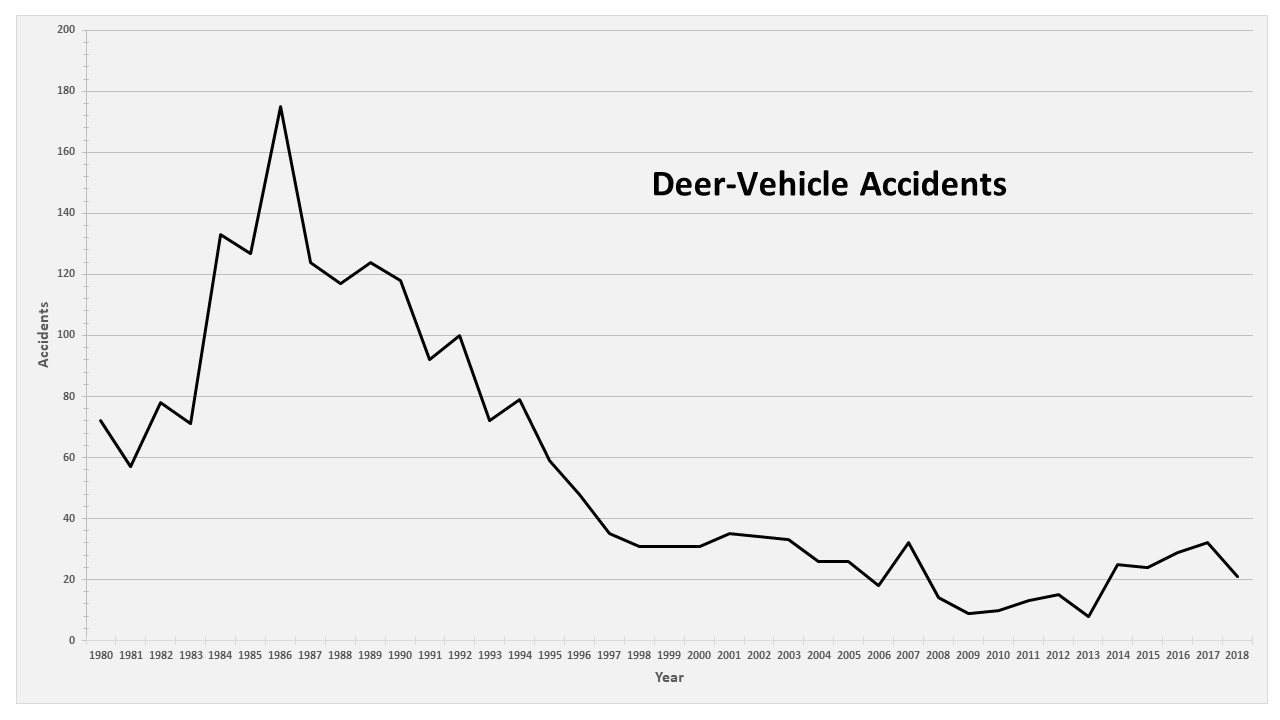 Although people working, residing, or visiting the Air Force 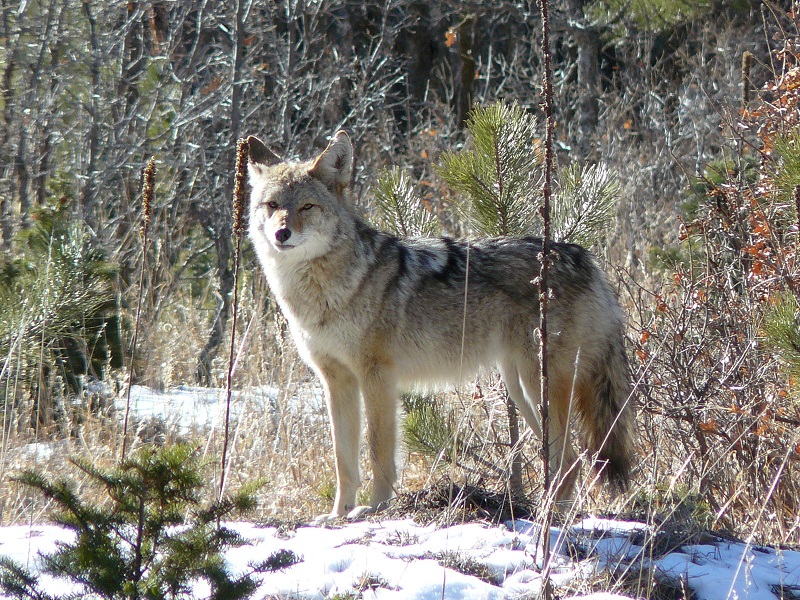 Academy and Farish Recreation Area can enjoy an abundance and diversity of wildlife, not all encounters with wild animals are safe or welcome.  Small mammals like bats, rabbits, squirrels, mice, prairie dogs, and raccoons can carry and transmit disease (e.g., rabies, hantavirus, tularemia, plague) and should be left alone. The same guidance applies to non-venomous and venomous snakes.  If animals are causing a problem near a residence or facility, contact Pest Management (333-2790) or Natural Resources to resolve the issue.  Offending wildlife can normally be trapped and relocated to areas where human contact is less likely.

Larger animals such as fox, coyote, bobcat, deer, black bear, and mountain lion present a greater safety hazard when close to people.  To minimize the risk there are many actions you can take to reduce the likelihood of a negative encounter with these species, including:

On the Air Force Academy, the single greatest 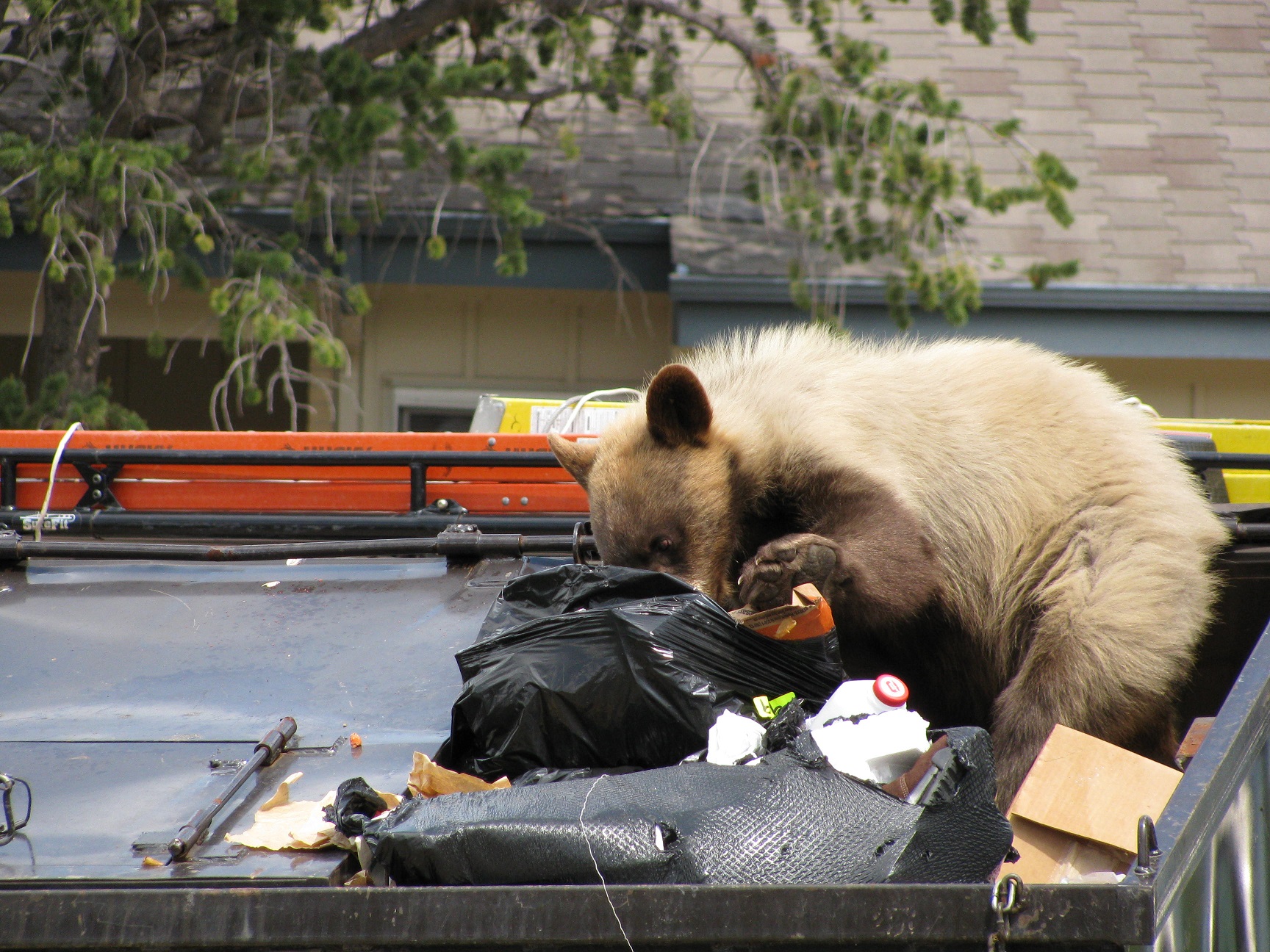 attractant of hazardous and nuisance wildlife is garbage in trash cans and dumpsters.  Animal-resistant trash containers and dumpsters are highly effective at deterring wildlife, however, a trash container is only secure and effective if all the doors and lids are closed and latched.  Damaged or broken trash receptacles should be reported to the Housing Office (867-9688) or Civil Engineering (333-2790) depending on who provides and services the container.

The Natural Resources office and Colorado Parks and Wildlife does not routinely destroy, trap, or relocate wildlife that are not posing an immediate threat to public health or safety, or causing significant property damage.  Colorado Parks and Wildlife has numerous helpful Living With Wildlife articles to help you become more animal-aware and informed about the wildlife with whom we share the Academy landscape. 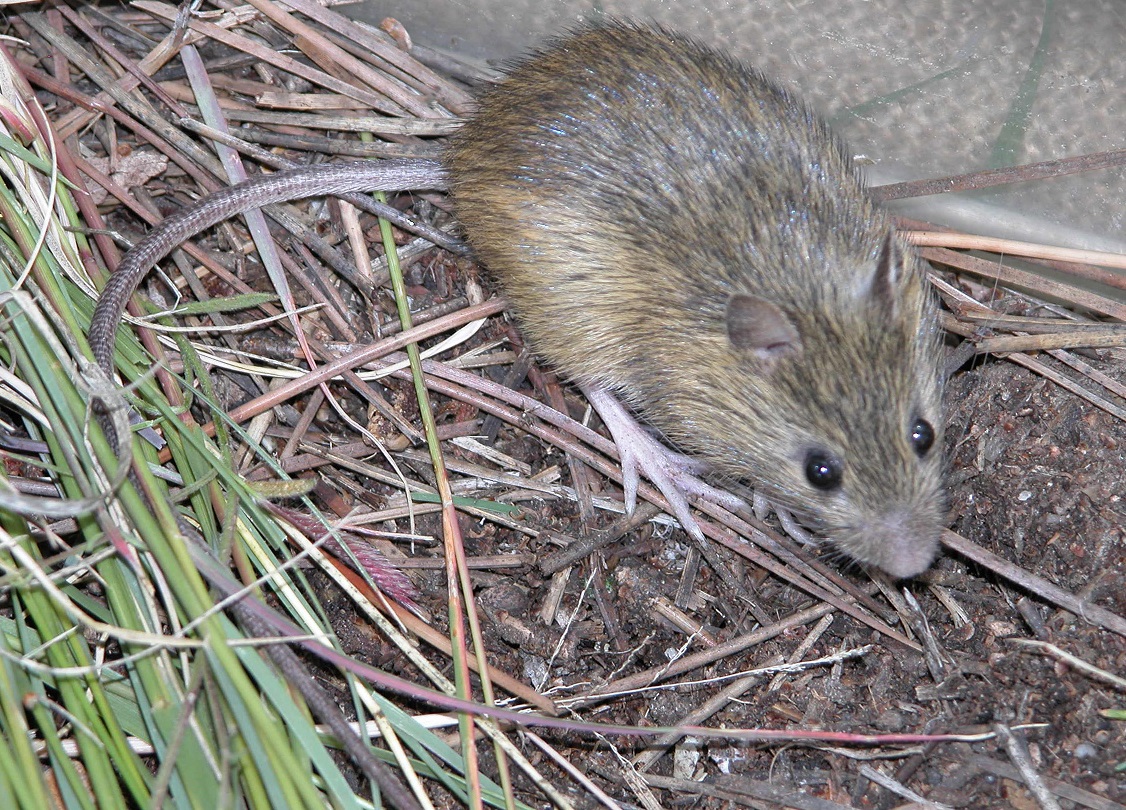 Preble’s Meadow Jumping Mouse (Zapus hudsonius preblei).  Since 2000, a Conservation Agreement between the Academy and the US Fish and Wildlife Service has guided the protection and conservation of this rare subspecies, while allowing for military training and routine operation and maintenance of the base's facilities and infrastructure.  Population and habitat monitoring, habitat protection, and the mitigation of unavoidable habitat disturbances have been focal areas of the Academy's highly-regarded Preble's conservation program since the mid-1990's.  Unfortunately, much of the on-base and off-base habitat for the mouse has been degraded by improperly managed stormwater and other development impacts.  Despite these issues, the Academy still plays a critical role in conserving Preble's and contributing to the U.S. Fish and Wildlife Service's effort to recover the species' so it may not require Endangered Species Act (ESA) protection in the future.  The Air Force Academy is not designated as "critical habitat" for Preble's due to ESA and Sikes Act provisions which exempt DoD facilities having species-specific conservation objectives and projects in an approved Integrated Natural Resources Management Plan.

To many, expending time and taxpayer dollars to conserve a rodent and its habitat seems pointless and wasteful.  The presence of the Preble's meadow jumping mouse in the landcape, however, is strongly correlated with the health and integrity of the riparian habitat and adjacent uplands.  Well-managed, high-quality Preble's habitat provides social, economic and environmental benefits, including flood protection, improved water quality and storage, outdoor recreational amenities, and quality habitat for a large percentage of Colorado's wildlife which utilize wetlands and riparian areas.

Natural Plant Communities and Other Species of Concern 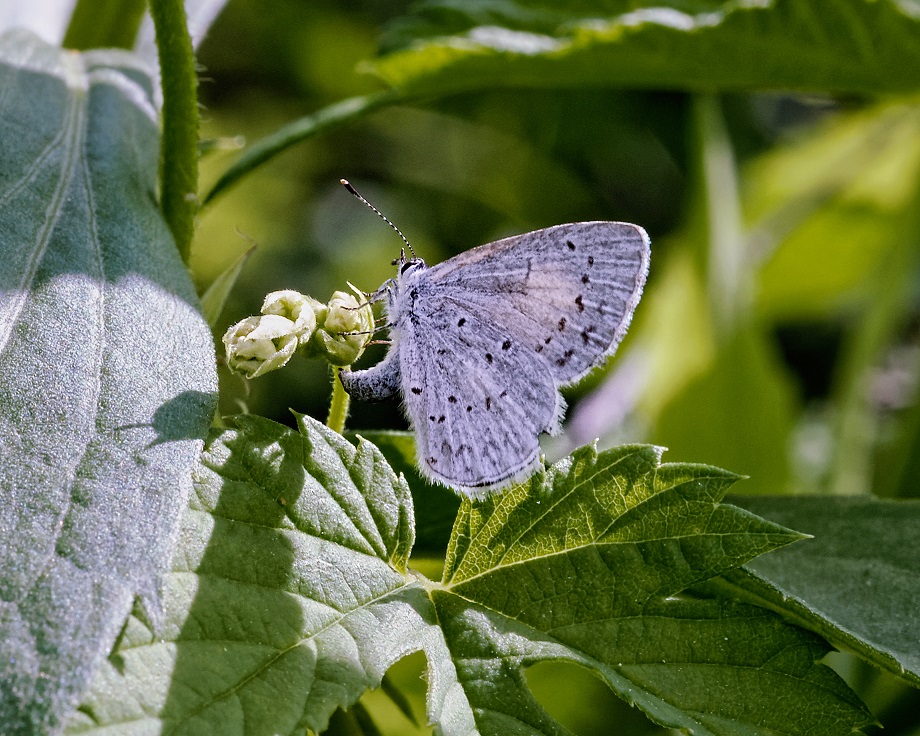 (CNHP) have conducted several inventories for rare plants, animals, and plant communities.  Recent surveys (2010-12) updated and added to the number of significant plants and animals recorded on the base.  Overall, nearly 20 rare plants or animals, seven natural plant communities, and four Potential Conservation Areas have been identified.  Despite a history of grazing, logging, farming, fire suppression, and military training, the Academy's landscape has retained enough integrity to support biological resources of State, National, and global importance.  Conservation and protection of these species and their associated native vegetation communities is considered in all land use and resource management decisions. This proactive approach helps preserve the Academy's natural heritage and may prevent or delay the need for future regulatory-driven management.